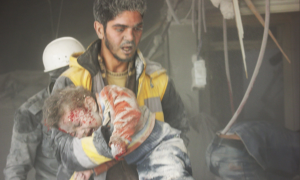 Militarily, the war in Syria is very complex & convoluted because all of the combatant forces have conflicting interests–except their unity in crushing the Syrian revolution against Assad’s dictatorship. The power of that revolution can be seen in the military force required to defeat it, including Syria, Russia, the US coalition, Turkey, Iran, Hezbollah, ISIS, & other foreign agents arming & funding mercenary forces. But one needn’t be a military strategist to take a stand on this war; one needn’t understand the conflicting interests which anyway shift according to the needs of counterrevolution. The fundamental thing to understand is that Syria is not a “proxy war,” not a regime change operation on the part of the US, not even a war to defeat ISIS. It is a militarized counterrevolution.

Given the conflicting interests of the combatants & the shifts in policy now that all parties claim to have defeated ISIS, it is inevitable that those conflicts would emerge on the battlefield, threatening years more of barbaric bombing & paramilitary violence. Provocations will be involved & counter measures taken, as was the case when Israel recently downed a drone Iran sent into Israel. Israel & Syria both responded by firing anti-aircraft missiles. The Israeli missiles directed at Syrian & Iranian targets in Syria reportedly killed Iranian military personnel. Another recent case is when US coalition forces took out at least 100 Russian mercenaries laying siege to a US military training facility. No one is grieving for those mercenary hired killers, but the regimes involved will use such assaults to justify continuing involvement in Syria.

This photo of a White Helmet rescuing a small child was taken on February 8th in Arbin city in Eastern Ghouta district of Syria. In 23 airstrikes & heavy artillery firing that day, 27 civilians, including ten children & four women, were killed; 114 were injured. And Assadists call this a US regime change operation? Those who dare vilify the White Helmets–who must sustain extremes of PTSD in rescuing traumatized victims with bodies mangled & often dismembered–are beyond political redemption. May they burn in hell. Our fullest solidarity with the White Helmets.

The only principled demands are for the immediate cessation of Syrian, Russian, & US coalition bombing & for the immediate, unconditional withdrawal of all foreign military forces from Syria. Out now!