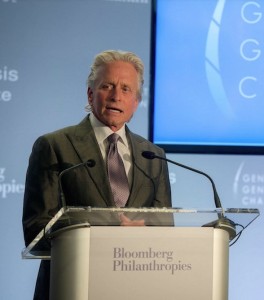 As an illustration of how Israel uses culture & celebrities to legitimize colonialism, they’ve enlisted the actor Michael Douglas to join Natan Sharansky for a speaking tour of US campuses to address “heightened anti-Israel activity on campus” & to talk about Israel & the Jewish people “at a time when certain individuals & groups in the academic community as well as other forces are making sustained efforts to delegitimize Israel.” Do you think they might mean Palestinians & BDS? Golly it sure sounds like it.

The tour is sponsored by the Genesis Prize Foundation, the Jewish Agency for Israel, & Hillel International. Genesis is a prize founded in 2012 by Netanyahu’s office to promote “Jewish values.” Since it comes from Netanyahu there’s some confusion about whether genocide is included as one of those values or not. Douglas got it last year but no one is sure why since he only became Jewish again a few years ago after he nearly croaked.

Sharansky heads up the Jewish Agency for Israel which is the main Israeli agency to promote “aliyah,” the immigration to & colonialism of Palestine. He’s the guy responsible for recruiting & moving in settlers to take over Palestinian lands. He’s actually Russian & a real rightwing piece of work. It may not be Israel’s best idea to send him out on the trail for PR.

The tour begins at Brown University on Jan. 28, Stanford University on Feb. 2 & the University of California at Santa Barbara on Feb. 3. People might want to bring BDS banners to the events–since certain individuals & groups in the artistic community as well as other forces are trying to legitimize colonialism.