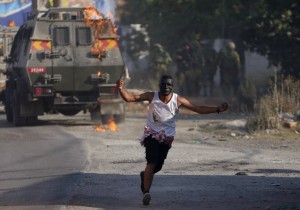 One wonders how long the Guardian-UK & other media think they can continue covering up Israeli apartheid–including carpet bombing in Gaza & the aggressive settlement projects in the West Bank–with insinuations against Palestinians? In the caption to this photo they said the confrontation here “was one of three in a matter of hours in which Palestinians died from Israeli-Palestinian violence.”

At this confrontation the young Palestinian allegedly threw a molotov cocktail at Israeli soldiers. Soldiers fired at him after he threw the fire-bomb. That is, they fired at the back of an unarmed man running away. For what purpose? The photo is quite clear: he only hit the tank; the soldiers are standing there unharmed. The Guardian doesn’t bother to report if he was killed or injured.

The bigger issue is that the West Bank is being illegally occupied; the soldiers have no right to be there & Palestinians have every right in the world to resist Israeli military violence by any means necessary. That is not Palestinian violence. It is a struggle for freedom against a brutal, murderous occupation that is uprooting entire villages, confiscating farm lands, killing people–young & old, & incarcerating thousands so Israel can move in settlers from all over the world to claim what is left of Palestine as the Jewish homeland.

The worst part of this confrontation is that Israel moved in tanks & troops during the funeral of Laith al-Khaldi, the 18-year-old they summarily executed while he was protesting the arson murder of baby Ali Dawabsheh. The funeral was in a refugee camp near Ramallah. Media reports tensions have increased since the death of baby Ali. What media means is that the barbarisms of Israeli occupation are being exposed for all the world to see–so they have to report the violence as though it were an even-steven thing.

From the Palestinian point of view, tensions have never decreased since 1948 when Zionist terrorists began driving them off their lands. And tensions will not end until Palestinian self-determination is won with a democratic secular state where Jews & Palestinians can live in harmony–& the monstrous dystopia of a Jewish-only colony is ended.

Build the hell out of the economic, cultural, & academic boycott of Israel.