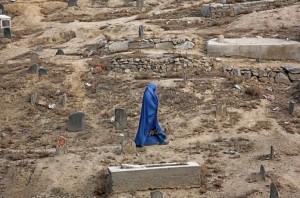 Last week, media showed a photo of an Afghan man making tea. Today, they show a woman visiting a graveyard in Kabul. The US war & bombing have been going on there over 14 years. What happened to war journalism? It’s even worse when it comes to Iraq & as bad as the coverage of Kashmir.

After the Vietnam War, media attributed antiwar sentiment to its war coverage–neglecting to attribute the intransigence of the Vietnamese or the massive power of the international antiwar movement. The war coverage was puny, like has always been true of war, but it was broader & more extensive than coverage of previous wars. There was coverage of war-weary & injured soldiers in the field & even photographic documentation of war crimes like napalm victims & summary executions of Vietnamese–unlike WWII coverage which was primarily “heroic” moments for propaganda purpose–like the posed shot of raising the US flag at Iwo Jima or US marines landing at Normandy. Is there any coverage at all of the Korean War?

The US Pentagon was concerned by the antiwar effects of Vietnam War photography & during the 1991 Gulf War it banned most media coverage. In response to media protests of exclusion, the Pentagon began “embedding” journalists during the second Gulf War in 2003.

Embedded journalists travel with military units. They actually sign contracts with the Pentagon about what they are allowed to report. So what they see & report is controlled by the Pentagon. As one US Marine official said, “Frankly, our job is to win the war. Part of that is information warfare. So we are going to attempt to dominate the information environment.”

Some have justified embedding by pointing out that journalists are targeted in modern war, held hostage, even murdered. And that’s true. Journalism is one of the most dangerous occupations in the world, even in countries not at war but under occupation, like Mexico, or under dictatorships, like Egypt & Saudi Arabia. It’s a lot safer to ride in a tank or a Humvee than it is to travel by car through territory being bombed indiscriminately by the US.

But how does that explain why embedding journalists means there is no war reporting at all? That there is what amounts to a news blackout on US wars? Charming to see a man making morning tea & a woman visiting her relatives in the cemetery but it’s not war reporting. And war reporting matters when the US is bombing hospitals & the Green Beret are committing war crimes.

We cannot force media, the handmaiden of the Pentagon, to report on US wars. But we also cannot allow news blackouts to govern the level of our antiwar activities.