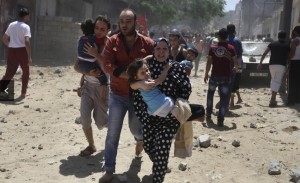 Shame-faced lying is the nature of media reporting on Israel & the Palestinians. If they could put a soundtrack to their pile of lies, it would be Andy Williams singing “The Exodus Song (This Land is Mine)” from the film justifying the expropriation of Palestine with paramilitary death squads & colonial hatred. The ABC news reader Diane Sawyer, who has made a career for herself croaking lies for the Pentagon, actually borrowed film footage of bombing carnage in Gaza & described it as Israel. There is no actual footage because there is no carnage in Israel comparable to the ethnic cleansing siege of Gaza. They’ve only been able to produce a few photos of Israelis cowering from sirens & a couple photos of property damage in Israel, allegedly from Hamas rockets.

Media publish the photos & try to counter their impact with captions. The Wall Street Journal album of carnage in Gaza used captions like: “At least 66 Palestinians have been killed so far, more than 50 of them civilians.” Since Gaza does not have any form of military they are all unarmed civilians–but the caption suggests Hamas militarism. Photo after photo of rubble in Gaza, of people running from air strikes in residential areas, of Israeli aircraft bombing cities are described in captions as “what police claimed was from Israeli bombing”–like it was just allegations from Palestinian authorities. What about what the Israeli military brazenly calls Operation Protective Edge? They bomb the hell out of Gaza & leave it to world media to cover for them.

The caption to this photo read: “A Palestinian woman runs carrying a girl following what police said was an Israeli air strike on a house in Gaza City.” You can stick any caption of lies on this photo & dramatize it with Andy Williams singing, but the overwhelming weight of evidence is that Operation Protective Edge is a massive Operation Ethnic Cleansing of Palestinians by Israel. Those who want to stand on the side of ethnic cleansing using cynicism & mysticism, claiming the disputes are ancient or even genetic to semites, shaking their naughty fingers at both sides, ought to hang their heads in shame.