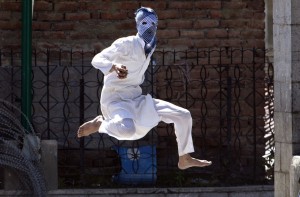 If you were asked to characterize media reporting on the struggles of Palestinians against Israel & Kashmiris against India, it would be incoherence. From media reports, you cannot tell what in the Sam Hill is going on if you don’t spend some time studying other sources. People get so confused they begin to think the solutions to these conflicts are as intractable as the coverage in impenetrable. That’s the entire point of such reporting: to render things stupid.

They’re not writing a book when they caption a photo but they shouldn’t try to pack so many confusions & irrelevancies into a few sentences. The caption to this photo read: “A Kashmiri-masked Muslim protester jumps in the air to avoid stones thrown at him by Indian police during a protest in Srinagar, Indian-controlled Kashmir, April 29, 2016. Government forces fired tear gas & pellet guns to stop rock-throwing Kashmiri youth after Friday prayers. The demonstrators were responding to a protest call by anti-India separatist leaders against what they said was government’s failure to arrest the troops involved in the recent killing of five civilians following an alleged molestation of a teenage girl student by an Indian soldier.

That’s one way of putting things–if you have marbles for brains. But what’s this “Kashmiri mask” thing all about” Do Kashmiris have a special kind of gizmo they wear to protect themselves from tear gas assaults? Because it looks exactly like what protesters around the world wear. Why does the protester’s Muslim religion get cited? Has anyone ever claimed the conflict in Kashmir was rooted primarily in a religious conflict?

If you actually want people to understand what is going on in this photo you might better caption it: This young man is one of thousands in Kashmir protesting the constant shootings of unarmed civilians by Indian occupying forces who are not prosecuted for human rights crimes. They are also protesting because a teenage girl who accused an Indian soldier of molestation is being held with her father & aunt in police custody against her will to terrorize her into silence. Indian troops are firing tear gas & pellet guns at the unarmed protesters. Pellet gun ammunition travels at velocities of 1,000 feet per second & causes permanent disfigurement, disability, & death.

India out of Kashmir! Self-determination for Kashmiris!