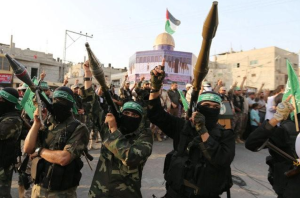 Here we come face to face with the pernicious bias in media against Palestinians. Reuters has photojournalist coverage all over the world, much of it quite powerful. But remarkably, they have almost no reportage on the Israeli siege & occupation of Al Aqsa compound & no photo coverage. Except for this photo which they describe as Hamas militants in Gaza protesting in solidarity with the prayer protesters outside Al Aqsa. Since Gaza is an open air prison they are unable to travel to East Jerusalem to participate in defense of Al Aqsa.

At the sight of these fighters we’re supposed to shudder in fear of Hamas at the gates of Israel & do an obligatory, unsparing denunciation of Hamas ideology. You can stuff that melodrama. Because of the Israeli blockade, Gaza is on the verge of collapse. If there are to be any denunciations, let them be of the barbarous Israeli blockade of Gaza. We may disagree vigorously with the politics of Hamas but Palestinians have a right to defend themselves against ethnic cleansing by any means necessary. Reuters should be all over East Jerusalem documenting the monstrous violence against thousands of unarmed Palestinian protesters & worshippers–not in Gaza at a parade of a handful of fighters without anything close to the military might of Israel, one of the most powerful armies & bomber fleets in the world.

End the occupation. End the blockade of Gaza. Self-determination for Palestine.

PS: If anyone can find photojournalist coverage by Reuters of the Al Aqsa siege, I would gladly be proven wrong.