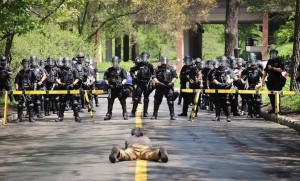 These riot cops are protecting McDonald’s corporate headquarters from about 2,000 fast food workers & supporters demonstrating for higher wages & the right to form a union without retaliation. The headquarters is located in Oak Brook, Illinois just outside Chicago, which is one of the wealthiest suburbs in the US & a suitable venue for McDonald’s CEO who earns $9.5 million bucks a year. McDonald’s workers earn minimum wage & pay about $400 a month for company health insurance.

The protest which drew 500 McDonald’s workers from over 36 cities, also included church groups, union activists, & community groups. McDonald’s can see that political tsunami coming at them & it’s certain all the other fast food joints are watching these developments with extreme alarm. And so are conservative union leaders since they’ve been sitting on labor militance for decades. This eruption among the poorest US workers will have a powerful effect on both unionized & non-unionized workers & help overcome the lethargy that marks the labor movement now. Or perhaps it is more accurate to say, marks the union leadership now.

Media reports McDonald’s is sweating about the public relations disaster such pro)tests are creating & a boycott of their stinking food is a real possibility. But a bigger problem than image faces the entire fast food industry which has been treating employees like chattel since the industry came on the scene in the 1950s.

Our fullest solidarity with these fast food workers. They bring new life to the US labor movement. It’s worth noting that many of these workers are immigrants.