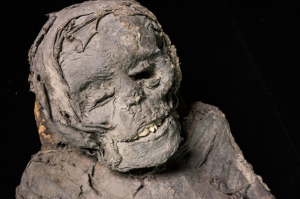 Maung Zarni, Burmese dissident in exile, on the UN Security Council that recently sat down with the Burmese generals to discuss how to force “Bengalis” (the UNSC did not refer to them by their proper name of Rohingya in deference to the genocidaires) back to concentration camps in Arakan state:

“Hey, world, it’s way past time for official funeral of the Security Council. It is as dead as a corpse or a mummy. The glorified corpse in the midst of never-ending wars & genocides. Rohingya, Syria, Myanmar & a long list of its irreversible failures.”

(Photo of mummy attached to post. Apologies to the mummy for comparison to the stinking corpse of the UNSC.)