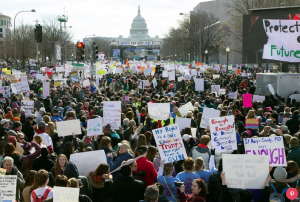 This won’t be a popular thing to say but I’m going to say it anyway: There are probably a million marching in DC for gun reform with close to 1,000 marches around the country. As a seasoned rally organizer, I know the kids at Stoneman Douglas High School in Parkland, Florida were not the primary organizers. It took tens of thousands of dollars to pull off this event with know-how in rally permits, crowd control, transportation, etc. What’s impressive as hell were the young people speaking with extraordinary power & eloquence. What’s less than impressive is that they made a connection between gun reform & getting out the vote but not a one in DC made the connection between gun violence & US militarism. Gun violence is not some disembodied phenomenon but is directly rooted in militarism. Many of these kids, especially those not sucked into the Democratic Party apparatus, have or will make that connection between school shootings & war & what these protests show is that they are potentially a mighty force for change & for rebuilding the antiwar movement. The reason it matters is that they use the same disembodied method to condemn the holocausts under Hitler & even use the same slogan “never again.” The causes of genocide & gun violence become abstractions & opposition is reduced to a moral crusade to avoid confronting the real causes of both. The more abstract & disembodied, the less effective, reducing public protest to blowing off steam rather than exercising political power.