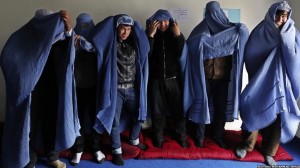 Media is circulating this photo of a group of 20 male “Afghan women’s rights activists” who donned burqas & marched through Kabul claiming solidarity with Afghan women as part of International Women’s Day next Sunday.

Burqas play a big role in Islamophobic propaganda worldwide & have come to symbolize the oppression of women under Islam & under Taliban rule in Afghanistan. The Taliban forced women to wear burqas in public during their rule until in 2001 UN-NATO marines & drone bombers moved in to “liberate” women with that beauty salon in downtown Kabul. Now when they’re killed by bombers at least they have their nails done.

The “Afghan women’s rights activists,” who are from a group called Afghan Peace Volunteers (likely a fly-by-night operation) blew their cover by carrying signs reading “Don’t tell women what to wear; you should cover your eyes”. One of the participants stopped giggling long enough to say, “One of the best ways to understand how women feel is to walk around & wear a burqa.” Several said the burqa felt “like a prison.”

It’s been 14 years now since US-NATO marines “liberated” Afghan women so it’s about time they stopped blaming the Taliban for everything. It’s also about time they stopped speaking for Afghan women. If & when Afghan women decide not to veil is entirely up to them. The problem is not the burqa that covers their heads but the bombs raining down on them. War must surely be the first concern of women rather than their wardrobes so why aren’t the “Afghan women’s rights activists” marching against that!? And why couldn’t they get any oppressed burqa wearers yearning to be free to join their charade?

A 16-year-old veiled schoolgirl named Medina Ali who was watching the little parade succinctly expressed the affront: “We don’t need anyone to defend our rights. This is just a foreign project to create a bad image for the burqa & Afghanistan. They’re trying to make those of us who cover our faces feel bad.” Amen, sister! You have the right to wear whatever the hell you want. We don’t care what you wear.
US-NATO out of Afghanistan! US out of Iraq!