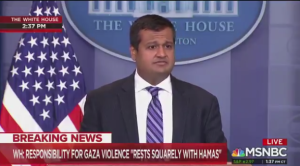 This is Raj Shah, the dirtball spokesperson for Trump who when asked about the slaughter of 58 Palestinians at the Trump embassy massacre said “Hamas bears the responsibility” because the Israeli government spent weeks trying to ‘handle this” without violence. He actually claimed the massacre was a “gruesome & unfortunate propaganda attempt” by Hamas. ‘Handling’ Palestinians without violence must explain the military occupation, the embargo of Gaza, the settlements on Palestinian lands, the arbitrary arrests, the snipers, drones, & tanks at the apartheid barrier with Gaza since March 30th.

(Photo of the dirtball is screenshot from MSNBC news report)