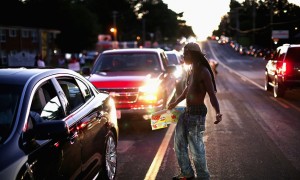 The national obsession with how low Black kids wear their pants crescendoes into more ordinances & school bans all the time. Concern about Black teens showing their underwear is not matched by how much cleavage women show. Ain’t that curious!? But it’s not about modesty; it’s about civil rights & it’s certain many kids ride their pants low just to challenge social hatred. In truth, those pants defy the laws of gravity & physics might want to investigate rather than let blue-nosed racists ban them.

Here a young civil rights activist in Ferguson leaflets outside a community meeting to discuss the murder of Michael Brown. Can his underwear possibly be of interest to anyone when he’s in the front lines of making history?