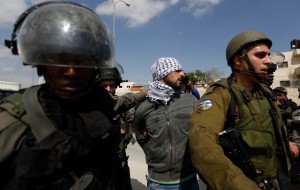 The caption to this photo read “Israeli border policemen & soldiers detain a Palestinian protester during a protest against what Palestinians say is land confiscation by Israel for Jewish settlements, near the West Bank town of Abu Dis near Jerusalem March 17, 2015.”

“What Palestinians say is land confiscation”–just like Gaza was bombed to smithereens ‘according to witnesses or Hamas officials who claim it was done by Israeli bombers’. Toying with language is another way of lying & making an ass of yourself at the same time. In 67 years of Zionist colonialism they can’t just say outright that Palestinians are protesting because Zionist settlers guarded by Israeli soldiers are destroying their olive trees, poisoning their water wells, beating up & arresting their kids, taking over their farm lands?

Who the hell does media think they’re kidding when they’re also full of accounts about settlements in the West Bank? When Netanpsycho made more settlements a selling point in his campaign? Whose land are they building those settlements on in occupied Palestine? Are they going to claim some patriarch was buried there 3,000 years ago & they have a Biblical land grant to the property?

Get real! And build the economic & cultural boycott (BDS) of Israel.