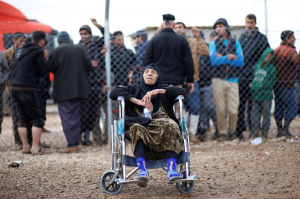 This Iraqi woman fled the military offensive in Mosul of 110,000 Iraqi & US-coalition forces against 5,000 ISIS fighters, half of them thought to be child soldiers.

When the US Pentagon & Assadists speak of “liberating” by carpet bombing, this refugee camp is what it looks like. Other than the mountains of cement rubble.

US out of Iraq & Syria. Russia & Iran out of Syria. No foreign military intervention.