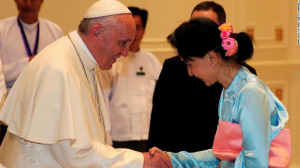 They’re already rolling out boatloads of rubbish about how adeptly & sensitively Pope Francis handled the Rohingya genocide in his speech alongside genocidaire Suu Kyi. Who knows if they’re kidding themselves or just trying to kid us? Outright evasion is not subtle nor sensitive. In the midst of genocide it is callous & collusive.

There are men, women, & children in Palestine, Kashmir, Arakan state, the Philippines, Sri Lanka, Iraq, Syria, Yemen, Bahrain, Egypt, Turkey, Guatemala, South Africa, the US Black, Latino, & Native American communities, & so many other countries who have been incarcerated, tortured, disappeared, disabled, disfigured, brutally murdered for standing up against oppression without bending the knee to oppressors, without compromises or equivocations of any kind. Ninety-five percent of Rohingya citizen journalists in Arakan state have been disappeared. Those who stand fearlessly against oppression & often lose their lives because of it are our spiritual leaders. Not Pope Francis who is openly canoodling with genocidaires.