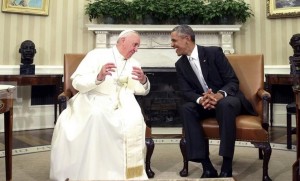 No one wants to be the one to rain on the Pope’s parade but preaching to regimes about poverty & climate change is not the same as holding them to criminal account. In many ways, he’s the Bernie Sanders of Catholicism.

We all appreciate a good homily against poverty but you have to take it from abstract to concrete & that’s where you find the devil lurking in the details. A monumental share of poverty in the world falls heaviest on women & children. If women cannot control their own reproductive lives, the poverty becomes even more devastating.

When Pope Francis toured the Philippines last January, he focused much of his preaching against Filipino legislation providing free family planning services & voicing his opposition to birth control. On the plane returning to Rome he told reporters ““Some think, excuse me if I use the word, that in order to be good Catholics, we have to be like rabbits, but no.” What the hell did that mean? Was he proposing abstinence instead of birth control?

Tomorrow he addresses the US Congress–a group which includes some of the most backward & misogynist halfwits on the planet when it comes to reproductive rights. They are presently debating whether to cut off funds to Planned Parenthood (PP), the biggest provider of birth control in the country. Will Pope Francis intervene against PP as he did against family planning clinics in the Philippines? And are women supposed to clam up our protests if he does just because he talks a good game about climate change? We think not.

We appreciate his counsel on poverty & climate change–though of course he’s talking to the wrong people for a solution. But we will not appreciate, nor will we hold our tongues, if he campaigns against PP & birth control in this country. Those would be fighting words because one of the greatest problems for poor & working women is the lack of access to reproductive freedom.

Don’t ask women to put aside our rights in deference to the Pope. It’s time the Catholic Church recognized women as human beings. There’s no negotiating on that & even ardent Catholics think that.