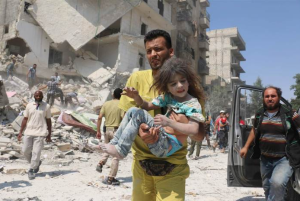 Reading a long article calling for self-determination for Syria as an oppressed nation withstanding a “US imperialist onslaught” & defending Russian intervention as Assad’s right to invite other countries to defend his dictatorship–which the writer does not deny.

To the writer’s mind, the war in Syria is all about US-backed Islamist militias threatening a legitimate dictatorship & he dismisses the popular movement against Assad with the flick of a wrist.

The article included this August 2016 photo of a wounded child being rescued in east Aleppo which Syrian & Russian bombers have been carpet bombing, including with chlorine-filled barrel bombs. It never dawns on the writer to question the military strategy of bombing a city with 250,000 civilians to get at those US-backed militias?

He calls this a socialist analysis. In a pig’s eye! We could find similar apologia in the archives of Stalinism.