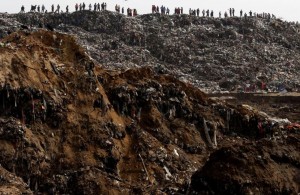 This is the Guatemala City garbage dump, the largest dump in all of Central America & certainly one of the most notorious in the world. About 500 tons of trash are dumped every day & at least 7,000 people, including children, work from dawn to dusk, 365 days a year collecting plastic, metal, & other recyclables to resell. They are called guajeros or trash-pickers.

Many families live in a slum area near the dump site; many actually build makeshift shacks & live in the dump. It is extremely dangerous to work the dumpsite & just as unhealthy to live nearby. Skin & respiratory diseases are rampant from handling or breathing the stinking chemical & toxic trash. People die in accidents all the time.

There have been repeated methane fires at the site that burn for days but there are also continuous fires deep within the trash mountain. There are also frequent collapses, especially after rain storms. This is not just true at the Guatemala City dump site but in sites around the world.

On Wednesday, there was another massive collapse at the dump & guajeros working the dump were caught unawares. Four people were killed, there were many injured, & at least 24 people are still missing.

For no apparent reason, media is reporting the deaths & missing not as guajeros but as “garbage collectors.” That’s what they call the people lined up here on the crest of the dumpsite when they are almost certainly guajeros. It’s likely the fatalities are far greater than is being reported since there is little control over who & how many are scavenging at any given time.

This is neoliberal waste management in the era which Obama calls
the “most prosperous, most progressive era in human history.”