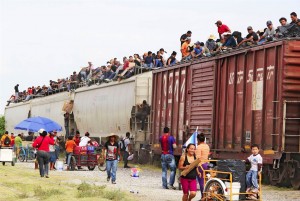 The US border patrol just rescued several undocumented immigrants who had been abandoned by their “coyote” (smuggler). They were rushed immediately to the hospital suffering from heatstroke & dehydration in the over 100 degree Fahrenheit temperatures here. When they recover they will likely be processed for deportation.

Many cross the Rio Grande River on the US-Mexico border into sugar cane fields which are suffocating & disorienting. They hide there from border patrols which often take mounted agents after them. This is also an area where many immigrants die & are buried in impromptu cemeteries set up caring residents.

This train named La Bestia is how thousands of Central American & Mexican immigrants travel north to the US border. They are subject to extreme violence from criminal thugs & from paramilitary death squads. They are robbed, raped, beaten, kidnapped, extorted, disappeared, murdered & dumped in mass graves. Many lose limbs from jumping on & off the moving trains & must return to countries without social security protections.

Even if they have money, they cannot travel on buses without being apprehended & deported by Mexican police & soldiers–even though the Mexican senate made it legal to transit to the US border.