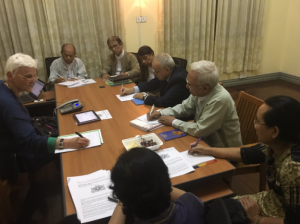 After the Commission convened in September, Annan went on a two-day whirlwind tour of Arakan state. In a press conference the next day in Yangon, he told reporters, “We are not here to do a human rights investigation or to write a human rights report”…but to write an “impartial report” of recommendations “to reduce tension & support development” in Arakan state.” He also told reporters that “personally” he did not witness genocide or persecution of Rohingya in Arakan.

On October 18th, several days into the current genocidal military assaults on Rohingya in Arakan state, Annan tweeted, “I am in constant contact with my Commissioners over the situation in Rakhine state” & he showed this photo of his commissioners in teleconference with him. He then cancelled his planned October 21st visit to Maungdaw District which is the center of the military assaults in Arakan.

Annan already made it clear to reporters that his commission was a ‘see no evil, hear no evil, report no evil” kind of operation–a snow job, a cover for the Myanmar regime, which is a military junta fronted by Suu Kyi. When he backed out of visiting Arakan state, it was to make damn sure he plays the role Myanmar compensates him for.

If he had gone to Arakan state, he would have witnessed the military-imposed state of emergency with a curfew from 7pm to 6am only applicable to Rohingya, not Buddhists. He would unavoidably have seen whole villages torched & heard reports from residents of extrajudicial killings, arbitrary arrests, disappearances, rape by soldiers. He would have seen the military occupation. But our man Annan didn’t want to see that because he’s been commissioned to play stupid & whitewash genocide.

The composition of the Rakhine Commission reeks of snow job. Out of the nine members, three don’t even live in Myanmar. If the other six are acceptable to the junta & Suu Kyi, they are likely entirely compromised & of no damn use to justice. There isn’t a single Rohingya member from human rights groups in Arakan state.
Human rights groups like Amnesty International heralded the Rakhine Commission but those who oppose genocide against Rohingya & demand justice cannot afford such credulity & should hold Annan accountable for his betrayals–although, of course, they are not his first. Betrayal of freedom struggles is how he made his living.

End the genocide of Rohingya. End the military siege in Arakan state.

(Photo is the Rakhine Commission meeting in comfortable suites in Yangon, far from the state of siege.)