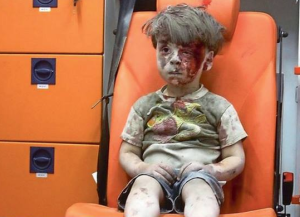 Khaleb Khatib, the cinematographer for “The White Helmets” documentary is also photographer for the organization in the field. He did not take this footage of baby Omran being rescued in August 2016 in Aleppo after Russian airstrikes. That was taken by photojournalist Mahmoud Raslan. Three people were killed in that strike, including Omran’s 10-year-old brother who was playing outside.

The little guy is clearly in shock & according to journalist Sophie McNeill did not cry until he saw his mom & dad when they arrived at the hospital in a second wave of people injured in the airstrikes.

Thousands of children have died since 2011. Khatib, who is 21-years-old was asked in a media interview about this incident with baby Omran. He said seeing kids like Omran is a daily occurrence, that he has “a lot of photos of injured children & it is very sad. I hate all of the world whenever I see a child crying, injured or killed.” He added “During a normal day in Aleppo, I wake up to the sound of air strikes & go to see if there is a new massacre….Air strikes on populated areas that are not under the control of the Syrian army are ongoing. Most hospitals in Aleppo are targeted & the arson makes me crazy.” That interview was of course before the fall of east Aleppo in December 2016.

His only comfort he said is calling his family who managed to flee Syria to Turkey. “All they want is for me to be with them in Turkey.”
The White Helmets deserve more than an Oscar; they deserve the highest respect for risking their lives to save others.