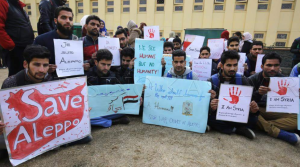 Nothing clears the toxic miasma of war-mongering, Muslim-hating, vilifying child victims of war more than the power of human solidarity–especially an expression of solidarity from Kashmiris in the sixth month of a military siege to the freedom struggle against dictatorship in Syria.

No military intervention in Syria. Down with Assad.