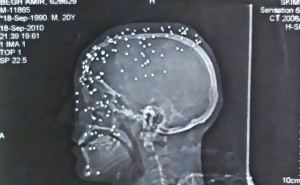 This coming week is Kashmir Awareness Week called by activists in London. Because of the systematic news blackout going back years, most people around the world know very little about India’s brutal occupation of Kashmir, let alone have developed activities or organizations for international solidarity. So this week is an important education event.

Regrettably, this has also been a very difficult week in Kashmir, with the commemoration of martyrs’ deaths & summary executions of more young people by Indian military forces. So this educational event also takes on the character of protest against the occupation.

Protestors around the world are facing extreme violence from riot cops, particularly assaultive weapons like rubber bullets, water cannons, stun grenade canisters–& in some places like Palestine & Kashmir, live ammunition. The Indian army has used pellet guns in Kashmir since 2010, a watershed year in the Kashmiri struggle against occupation. They claim they use pellet guns as “non-lethal weapons” to quell anti-India protests. But pellet guns use hydraulic force to pump out hundreds of pellets at a time which become embedded & can cause permanent blindness & disfigurement as well as fatal injuries by destroying vital organs. The pellets are made of lead & the deleterious health effects of that metal are not mitigated in pellet form. There are actually restrictions in the US on the use of lead pellets in hunting because of its negative impact on birds & the environment. Because of the scattershot nature of buckshot, many children & passersby are also blinded & injured. The lethality & barbarism of the weapons are beyond dispute.

Let it be noted that the Egyptian activist, Shaimaa el-Sabbagh, was shot to death (on January 24th, 2015) by a pellet gun when the buckshot pierced her vital organs. Pellet guns were also used in the 2011 Bahrain uprising when the regime hired two super-cops, one from the UK & one from the US, to organize security. Pellet guns were part of their arsenal & there are dozens of photos of Bahraini protesters riddled with buckshot which cannot be removed.

The photo is an X-ray of Amir Kabir Beigh, a 22-year-old Kashmiri, showing dozens of lead pellets embedded in his skull. It appears they were directing the pellet gun directly at this eyes & head–& it looks like more documentation for human rights crimes against Kashmiris by the Indian army.

Today Kashmir is considered the most densely militarized zone in the world, administered & occupied by over 700,000 Indian soldiers. Since the 1990s, the death toll from political conflict has risen to 70,000, with an estimated 100,000 tortured & 10,000 disappeared.

Things are not going to improve for Kashmiri justice under Modi, India’s reactionary prime minister. His close political association with apartheid Israel bodes very badly. Colonial wars eat at the very soul of a society, engendering extreme violence at home & abroad unless they are actively opposed & international solidarity extended to the people of Kashmir.

Our fullest solidarity with the people of Kashmir.