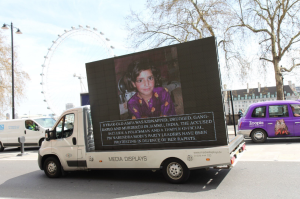 Justice for Asifa billboard greets Modi on his trip to London. Our little sister who suffered so unbearably is now the battle cry for women & children around the world, especially those in war, occupation, & genocide. The savage crime against her has brought to the fore justice denied for sexual violence against women under occupation in Kashmir, against women of the oppressed castes in India, against Rohingya women by the Burmese army, against Mayan women in Guatemala, against Syrian women by the Assad regime. May her memory keep us steadfast in the struggle against sexual violence.