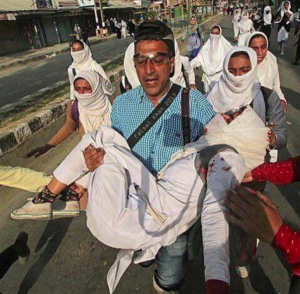 This is an act of courage that should not be underestimated since India routinely engages in violent harassment against Kashmiri photojournalists & their families. In one incident last year, Indian troops surrounded the home of a photojournalist while he was away & terrorized his wife & child.

This 2015 article by Gowhar Geelani describes the harassment & dangers journalists face in Kashmir. As he says, “journalism is a dangerous business.” Those who pursue it deserve the highest respect. (Once they get embedded with the military, it’s an entirely different matter. That is not journalism, but propaganda.)