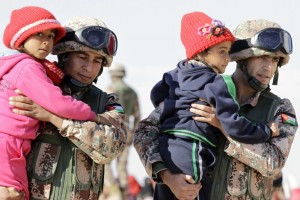 Such a touching photo! Jordanian soldiers helping Syrian children cross the border in flight from massive bombing–nothing at all like those mean soldiers on European borders beating back refugees with tear gas. In fact, this photo is an exceptional moment in time that does not represent Jordan’s refugee policies which are as barbaric as those of the EU, Israel, & US. It’s border is now mostly shut down & completely militarized–although it previously accepted refugees from Palestine, Iraq, Syria, & other groups like Kurds.

Jordanian officials publicly boast of their open border policies & portray the country as a refugee haven. The development of Jordan rests on its refugees, beginning in 1948 when it accepted & gave citizenship to Palestinians fleeing Zionist paramilitary death squads. As Israel expanded its colonialism of Palestine, there have been successive waves of Palestinian refugees to Jordan. In 1948 they were integrated but by the 1967 war they were registered as displaced persons. Half the population of Jordan is now estimated to be Palestinian but over 2 million continue to live in ten registered refugee camps.

The tensions now between the Jordanian monarchy & Palestinians is entirely related to the development of Palestinian political resistance to Israeli ethnic cleansing among those refugees which puts them at odds with Jordan’s alliance with the US & collusion with Israel. As part of that alliance, the Obama administration pledged over $1 billion a year in foreign aid to Jordan. In return, Jordan is part of the US-backed, Saudi-led bombing destruction of Yemen & doesn’t lift a finger to support Palestinians against Israeli aggressions. One stark example is that a Jordanian trust administers Al-Aqsa mosque in East Jerusalem & doesn’t make a peep of protest to Israel’s incursions & destruction of the mosque.

The political incompatibility of Palestinian Intifada with the monarchy’s political perspectives explains why Jordan has been refusing since 2012 to accept Palestinian refugees living in Syria who are now fleeing for their lives. Nearly 20,000 Palestinians have been denied entrance to Syria. If they get through with false papers they are soon deported. But Palestinians aren’t the only refugees from Syria being denied entrance. According to UN officials, Jordan has closed down all but two of its border crossings from Syria. The two crossings remaining open are in hard to reach, God-forsaken desert areas, devoid of water, shade or vegetation. To reach the open crossings at Hadalat & Rukban (both near Jordanian military bases) requires several more days of travel through areas controlled by the Syrian military where refugees report coming under fire.

Jordanian military officials at the border claim refugees trying to cross at the two locations grew overnight from 3,000 in September 2015 to 17,000 now.That belies not just UN reports but lengthy investigations by Human Rights Watch (HRW) which has been monitoring the situation since 2012. According to Jordan, it’s admitting 5,000 Syrians a day; according to the UN, it’s 50 to 100 refugees a day–excepting all Palestinians. Jordan boasts it has so far accepted 1.6 million Syrians; UN officials claim it isn’t even half of that at 600,000. Many of those who cross are denied registration & immediately deported back to a war zone.

But it gets worse. After Jordan closed most of its border crossings, it continued to allow entry to the war-wounded–many of them suffering injuries from barrel bombs used by Syria & Russia. In 2014, Jordan began requiring every wounded person have a valid ID card regardless of the severity of their injuries. Children under 12 & many whose documents had been destroyed as a result of bombing (or who didn’t think to get their passports after their legs were blown off) were denied entrance for medical treatment. Jordan also began refusing entry to family members accompanying injured minors. That cut the number of war-wounded allowed entry right in half.

The 17,000 people stranded at the border with inadequate shelter, food, water, & medical care include pregnant women, elderly, disabled, those with special needs, many who are sick with leishmania, scabies, & other infectious diseases. According to HRW, 16 lactating mothers had no milk, & 200 women were reported as being in their last trimester of pregnancy.

The situation isn’t going to get better without political opposition because Abdullah II (the man who calls himself king of Jordan) told CNN this week: “Part of the problem is that they have come from the north of Syria…which is the heartland of the Islamic State. We know there are Islamic State members inside those camps.” How does that distinguish itself from EU arguments equating refugees to terrorists? Not in any way. The refugee crisis is exposing Jordan for the bastion of reaction it has been since it threw in its lot with Israeli apartheid & US militarism.