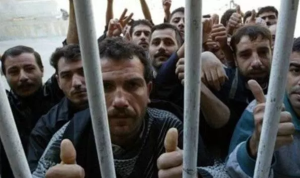 Jonathan Cook, respected for his writing about Palestinians & Israel, recently entered the debates about Syria on the side of Assad. His latest essay titled “Syria is the dam against more bloody anarchy” elaborates his theory that the “proxy war” in Syria is about Israel’s plan to Balkanize the Middle East.

He shares the political malignancies of Global Research, promoting the theory of a “Greater Israel” plan, a US-Israel collaboration to break up states in the Middle East, to Balkanize & make them part of an expanded Israel. Other than a nearly 30-year-old document written by Israeli extremists (the Yinon plan), there is no evidence for this scenario. The evidence is that Israel is a military fortress serving US plans for the Middle East at the expense of Jews. But in Cook’s imaginary universe, Israel controls the US government–not unlike how Global Research claims the world is controlled by reptilian Jewish bankers & media magnates.

Then we come to Cook’s defense of dictatorship. We will put aside that he cannot distinguish the differences between foreign intervention in Syria, Iraq, Libya. Assad, Hussain, Gaddafi were “ruthless & brutal” he admits but they “also oversaw societies in which there were high levels of education & literacy, well-established welfare states, & low levels of sectarianism.” Well if there’s anything that justifies gulags, forcible disappearance, carpet bombing of civilians, it’s high levels of literacy & social security. But how did Syria with such low levels of sectarianism become a hotbed of ISIS, conflict between Sunnis, Shia, & of course what alarms Cook most, Wahhabism?

Cook lowers himself to the contemptible in what is a cliche of Assad apologetics. He wants to distinguish himself from those head-choppers & doesn’t want to excuse human rights crimes by the Assad regime. He just wants to focus on the more important issue of Balkanization. He’s not getting anything past anybody when he says it’s “tempting” to use human rights as the measure for which side to support but this conflict isn’t about human rights. He’s reduced himself to a greasy apologist willing to overlook gulags & bombing of civilians because in his mind Israel is scheming against Assad.

Human rights do matter; they are the primary measure for revolutions. A notable omission in this essay is any mention of the Syrian revolution or other Arab uprisings. It’s another denial Cook shares with all other Assad apologists who are racist at heart & don’t see Arabs or Muslims as having aspirations higher than literacy & social security & willing to tolerate tyranny for them.

Cook has disgraced himself with this apologetic based on an anti-Semitic theory identical to the defense of Assad by David Duke & other fascists. The fate of a democratic state where Palestinians & Jews live in harmony is dependent on the success of the Syrian revolution & all the Arab revolutions. Pity Cook doesn’t get that.

(Photo is Palestinians in Assad’s gulag.)