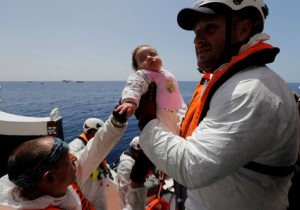 This baby refugee rescued from a sinking boat off the coast of Libya could be one of those “jihadi” terrorists we’re always warned about. But this rescue worker whose humanity makes mockery of paranoia & racism rescued the baby & everybody else on the boat. That’s what being human is all about.

The rescuer is part of the Phoenix rescue ship operated by Malta-based MOAS. SOS Mediterranee & Doctors Without Borders operate the Aquarius rescue ship & these are the only rescue operations for hundreds of thousands of refugees on the Mediterranean route from Libya. The EU & NATO navy ships are too busy thwarting refugees to rescue the drowning.

Anyone looking for a place to contribute help for refugees might consider one or both of those marine rescue operations so they can expand fleets & services.

Accepting refugees is international law & an imperative of human civilization.

Open the borders. Immigration is a human right. No human being is alien to us.