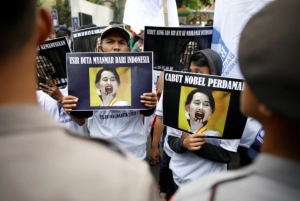 Rohingya solidarity rally in Jakarta, Indonesia on September 4th. This photo accompanied one of the countless articles describing the political eclipse of Aung San Suu Kyi’s reputation as a human rights champion. There is a petition with thousands of signers demanding she be stripped of her Nobel Peace Prize. Why dignify a prize won by Henry Kissinger & countless other war criminals? Let her keep the damn thing.

Exposing her human rights crimes as a front for genocide is part of standing in solidarity with the Rohingya people in their struggle for full human, democratic, civil, & refugee rights.