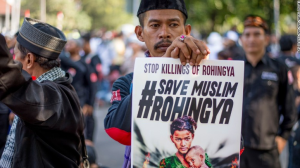 Jakarta, Indonesia stands with the Rohingya.

What is so significant about solidarity protests for the Rohingya people is that they are spreading across Asia, the Middle East, & in many Muslim countries & are not going away. Ethnic cleansing & genocide against Muslims is one of the most constant, unreported & undocumented human rights crimes in the world & has been for a very long time. That was legitimized & has crescendoed to a fever pitch since 9/11 & the US-NATO war against Afghanistan using Islamophobia as a battle cry. We see its catastrophic consequences in Syria, Burma, Palestine, Kashmir, India & so many other countries, including in Africa. A factor of the greatest importance is the Arab Spring uprisings which shook the foundations of the old tyrannies sustained only through arsenals supplied by the US & European countries & former colonizers.

Burma is attempting the “final solution” for the Rohingya people & our imperative mission is to stand with them in every way we can. As Haseeb Rahman said, someday we will be judged by what we did in response. Let the judgement on our humanity be that we stood together to defend our Rohingya brothers & sisters until this genocide is decisively defeated.