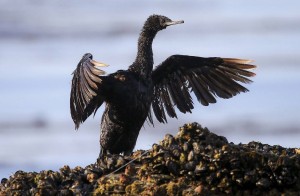 This is a bird covered in oil from the 100,000 gallons spilled by an abandoned pipeline into the Pacific Ocean off Goleta, California (near Santa Barbara). There’s always a different reason for oil spills: ruptured pipelines, sabotage or piracy on the line (by criminal gangs, & even the drug cartels in Mexico), typhoons & hurricanes, war & bombing, drunken captains, lack of maintenance. It’s always something with those oil companies, isn’t it!?

These oil spills have happened all over the world, on every continent, in every ocean. Plunder usually disastrously affects just the plundered countries but the oil companies have changed all that. They saw no reason to leave the plundering countries out of their catastrophes–not just with oil spills but with fracking contamination. And that would be the hallmark of neoliberalism, the barbaric phase of capitalism: “chickens coming home to roost”.

There is an urgency to removing stewardship of our glorious mother Earth from the neoliberal oligarchs & their minions so blinded by greed that they carry us & all of animal & vegetative life headlong to extinction. It’s a mighty historic challenge but the future of humanity depends upon it. We need a world where life is not sacrificed to greed.