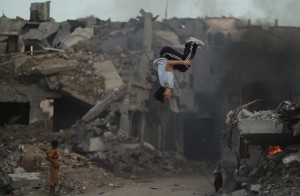 The growing bonds of solidarity between Palestinians & US Black activists that emerged in Ferguson after the murder of Michael Brown is a serious concern to Israel & its supporters–most importantly because it exposes the racist fault lines of Zionism & challenges the apartheid policies of Israel. This turn of events is not one Israel can allow to go unchallenged–& it has not.

Jews in the US have historically played an important role in social justice–including building unions to fighting for civil rights & they did so because of their own history of persecution & pogroms. Many claim such progressive politics are based on “Jewish values” but that’s an exceptionalist claim since all religions teach moral high-ground. (Delivering on it is another story.) The colonial formation of Israel at the expense of Palestinians has undermined that historic role & many liberal Jews now promote the racist & exclusionary ideology of Zionism which in its foundations rejected the broader struggle against racism & colonialism & replaced solidarity with rightwing nationalism. It can no longer claim affinity with civil rights.

In May 2015, a group of rabbis associated with the Jewish Federation, a leading player in the US Zionist movement, organized buses, issued public statements, & posed for photo ops at protests in Baltimore calling for justice for Freddie Gray, the Black man who died in police custody. The group was led by Rabbi Yerachmiel Shapiro whose FB profile picture includes a prominent Israeli flag to show his commitment. Is it conceivable the good rabbi is sincere about civil rights in the US but silent about racist discrimination & violence against the Ethiopian community in Tel Aviv? Does he give Israel a special dispensation for racist assaults on Ethiopians & for ethnic cleansing of Palestinians? Because in politics you can’t have it both ways.

The cultural boycott of Israel is an essential element in the BDS campaign because Israel consciously uses musicians & athletes to legitimize colonialism & render a favorable image to Israeli apartheid. Prevailing on performers to honor BDS & refuse to perform in Israel is a primary way most of us can stand with Palestinians.

Today is Martin Luther King, Jr. day & media is saturated with the touching tribute paid him in Washington, DC by two male singing groups–the Maccabeats, a group of ardent Zionists & promoters of Israel, & Naturally 7, a Black group based in NYC. The two groups created a video tribute & this morning held a concert on the steps of the Lincoln Memorial where MLK delivered his “I have a dream” speech in 1963.

It’s entirely possible the Maccabeats feel strongly about Black civil rights in this country. But once again, you can’t have it both ways. In 2013, the Maccabeats made a music video called “Aliyah to Israel” romanticizing Jewish colonialism & in 2014 produced a video medley of songs called “Home” about Israel. What about the Palestinians? The Maccabeats have opened concerts for Matisyahu, the American Zionist singer who publicly supported the Israeli commando assault on the Mavi Marmara humanitarian flotilla to Gaza in 2010 (where nine activists were killed) & has remained silent on carpet bombing in Gaza. There isn’t a public peep out of the lot of them about the persecution of Ethiopians in Israel or against the ethnic cleansing of Palestinians.

They sing pretty but that’s not good enough when you’re croaking for apartheid. Their tributes to MLK are likely part of Israel’s campaign to glorify Israeli colonialism, counter solidarity between Palestinians & Black activists, & have precious little to do with Black civil rights in this country. Because it can never be said often enough: you can’t have it both ways in politics & few are stupid enough to think you can.

This is a Palestinian teen in Gaza practicing his Parkour skills midst the ruin of the Shejaia neighborhood in Gaza City caused by Israeli carpet bombing in 2014. That is the cost of Aliyah.

Build the cultural & economic boycott of Israeli apartheid. Buy nothing with barcode beginning 729.