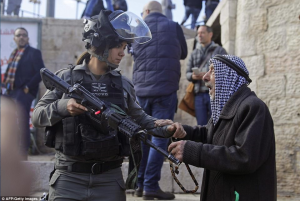 Another picture worth a thousand lies:

The media caption said “Israeli forces were called in to disperse Palestinian protestors outside Damascus Gate in Jerusalem’s Old City this morning amid rising tensions following Trump’s announcement.” If they want to tell the truth, the whole truth, & nothing but the truth, media would report that this Israeli soldier is threatening an elderly unarmed Palestinian with an assault rifle outside the Al Aqsa mosque compound in occupied East Jerusalem. The whole truth would be that Israeli occupying soldiers make it almost impossible for Palestinians to worship at the mosque but frequently escort rabid Zionist nationalists through the compound.