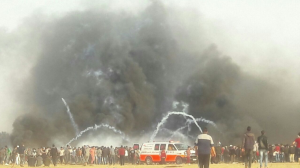 Israeli snipers at the Great Return March targeted unarmed protesters as well as medical staff as thousands of protesters gathered at five sites in Gaza along the apartheid fence. The Gaza health ministry reports that three Palestinians were killed today, 200 were injured with 154 hospitalized for gunshot wounds & tear gas inhalation. Sixty were wounded by gun fire, including a journalist shot in the foot & four medics were among those treated for tear gas inhalation. Protesters had to clear away razor wire coils that Israel placed in Gaza near the apartheid fence to deter the protesters from demanding the right of return for millions of Palestinians living in refugee camps.

The UN High Commissioner for Human Rights Zeid Raad al-Hussein called the situation “deplorable” which is an entirely fatuous description for what can only be called a massacre. We should make it extremely difficult for Israel to continue vilifying Palestinians as terrorists after this unspeakable display of savagery against peaceful, unarmed protesters.

Photo is protesters & medics being drowned in tear gas at the march today.