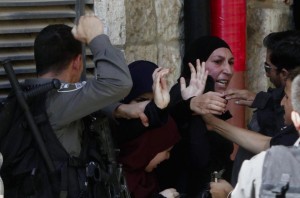 There are many photos of Israeli police attacking Palestinian women yesterday at the Al-Aqsa Mosque compound. Media has chosen to call them “scuffles” when the photos clearly depict assaults. The Israeli account of what happened is garbled–in the way all fictitious song-&-dance stories are–but the incident yesterday was a replay of many other provocations by right-wing Zionist thugs protected by Israeli cops who try to reclaim the site of the mosque as sacred to Judaism. That’s why it’s not believable. Even the logistics don’t add up.

Israel claims masked Palestinian “rioters” stockpiled explosives, Molotov cocktails, & other weapons inside the mosque to attack thousands of “Jewish worshippers gathered for prayers at the Western Wall for Tisha B’Av, a day of mourning that commemorates the destruction of the first & second Jewish Temples.” Reports conflict on where the worshipper/thugs were–at the Western Wall or inside the mosque compound. The Western Wall is a section of the enclosure around the Al-Aqsa compound known as the Noble Sanctuary to Muslims & the Temple Mount to Zionists & is located in East Jerusalem under illegal occupation by Israel since 1967.

The Noble Sanctuary is 35 acres of fountains, gardens, museums, as well as the Al-Aqsa Mosque & the Dome of the Rock (which has sacred meaning to Muslims). The entire area is regarded as sacred space & is an educational center as well as religious sanctuary. It’s existed in various reconstructions for over 1,300 years. The fallacious media mantra is that the Noble Sanctuary is the holiest site for Judaism but only the third holiest site to Islam. The reason offered for why it’s sacred to Judaism is that it’s the original site of Solomon’s Temple said to have housed the Ark of the Covenant & destroyed in 586 BCE (for which there isn’t a shred of archaeological evidence). There was an actual temple on the site between 516 BCE & 70 CE when the Romans destroyed it. It was renovated by Herod (of Biblical notoriety) & the supposed remnants of the Herodian wall make up the Western Wall (known also as the Wailing Wall) heralded by Israel as the most sacred place of Judaism.

Millions of people make pilgrimage & fetishistic homage to the old stone wall, the altar of the Israeli state. One would never ridicule even the most absurd religious practice but there is no need to feign respect for a narrative fabricated solely to serve Zionist nationalism & not religious commitment. It’s not inconceivable that there’s a mystique around that pile of stones. But a mystique is not the same as a religious tradition or historic claim.

(This post is a slightly edited version of one I posted in December 2014; I’m reposting to clarify why there are constant Israeli attacks & ongoing conflict around the Al-Aqsa mosque.)