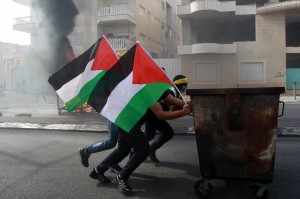 It is extremely distressing to see Israeli propaganda against Palestinians passing as legitimate news in every mainstream media source. It wouldn’t be an exaggeration to say that a few incidents against Israelis in Jerusalem are receiving more attention that the entire 51 days of Israel’s murderous carpet bombing siege in Gaza in 2014.

That kind of outrageous lying-assed coverage is not going to change because the stakes are so high in maintaining Israel as a military fortress against the rise of popular uprisings in the Middle East. It isn’t just the US perpetrating the deceit against Palestinians to maintain its economic & political hegemony but the Arab regimes who do not want their autocratic rule challenged again as they were in the Arab uprisings of 2011. That’s what makes the Arab regimes such firm allies with the US & Israel & why they are armed to the teeth by the Pentagon.

Israel as a state never had anything to do with sheltering Jews from the persecution & pogroms they were subject to for centuries but has made Israeli Jews the front phalanx of tyranny in the Middle East. They are not endangered by Palestinians but by Israeli militarism aided & abetted by the US & Arab regimes.

Maybe there were a few Palestinians in Jerusalem who snapped & engaged in a “terrorist” act. PTSD does that to people put under sustained assault who have seen their beloved blown to smithereens by Israeli bombs & homes bulldozed for settlers from all over Kingdom Come. And maybe they were Israeli agents provocateurs–which to be frank & not at all conspiratorial, is far more likely.

We cannot force media to tell the truth. The entire edifice of the Israeli colonial project would crumble. So we are going to have to live with lies in media, especially as they go into overdrive to counter BDS & growing Palestinian solidarity. If we want justice & peace in the Middle East, we will have to be the voices of Palestinians who are enduring a sustained & barbaric assault.

“We” includes Palestinians in diaspora & all men & women of good will who must go public with our support in street rallies, educational forums, debates, to tell the truth & support Palestinians. This is an emergency call to arms & no time for desultory response. We need to hit the pavement placard in hand demanding Israel stop the violence & end the occupation.

This is Palestinians in Bethlehem, West Bank, with a flag as their banner & a dumpster as their only defense against one of the mightiest & most barbaric military forces in the world. We need to back them up with the powerful weapon of solidarity.

All out for Palestinian justice!