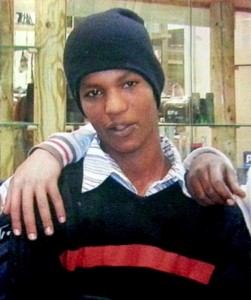 Media is in orbit today, doing a freak-out about two Israelis “being held hostage by Hamas” after crossing illegally into Gaza. Avraham Mangisto, a 29-year-old man who–with completely unconscious racism–they identify as Ethiopian Israeli (though his ethnicity has no relevance to the story) was seen crossing the apartheid barrier fence into Gaza in September 2014.

The second “hostage” is an unidentified Israeli Palestinian, a Bedouin from the Negev desert area. Israeli officials provide no details as to how or when this second man got into Gaza or why he went there. But they claim somebody somewhere in Gaza has him in custody. Other than the accusation, they offer no evidence at all. That’s a charge that wouldn’t hold up in small claims court.

According to an unnamed Palestinian official in Gaza, Mangisto was arrested after entering Gaza illegally. He crossed just a few weeks after Israel’s carpet bombing siege so Hamas would have been on red alert for Israeli military operatives. When Hamas officials realized he wasn’t a soldier & that he had likely mental health issues, they released him. But Israeli officials claim that “according to credible intelligence,” Mangisto is being held against his will by Hamas.

It’s entirely possible Hamas has Mangisto in custody & if the fellow has mental health problems that would make it a human rights problem. If he’s being held, he should surely be released to his family. Because Hamas may have political problems but it has never stooped to the degraded levels of Israel. Of course, only a political fool would take Israel’s word as “credible intelligence.” Nothing that comes out of Israel’s propaganda office is either credible or intelligent but makes a mockery of both.

So why is this alleged “hostage crisis” over two guys in Gaza banner headlines all over the world when according to Btselem, the Israeli human rights group, there are now 5,554 Palestinians held in Israeli prisons, 357 of them from Gaza? Another 1,028 Palestinians are in Israeli prisons for crossing into Israel illegally, 16 of them from Gaza. Israel considers all of them criminal offenders. And not only that, but Israel arrests & imprisons between 500 to 700 Palestinian kids every year in the West Bank & East Jerusalem. Hundreds of Palestinians are held years in administrative detention without charges; many are subjected to torture. Why isn’t all that banner headlines!? Don’t Palestinian lives matter? Is Israel exempt from human rights standards in who, why, & for how long they incarcerate Palestinians, & under what conditions prisoners are held?

Build the hell out of the economic, cultural, & academic boycott of Israel (BDS)!