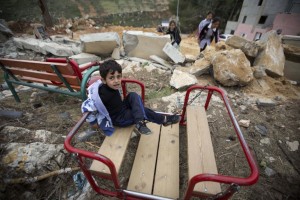 It takes an image like this to bring home not just how brutal & violent but how putrid & small-minded the Israeli occupation of Palestine is. This little Palestinian boy is sitting in the ruins of a playground that was demolished yesterday by Israeli military bulldozers in the village of Za’tara near Nablus in the occupied West Bank.

The Israeli military demolished the playground, which was funded by the Belgian Development Agency & built only 11 months ago, because they claim it was constructed without proper permits from Israel.

The treacherous Oslo Accords sectioned the West Bank into three administrative areas, Areas A, B, & C, depending on the measure of Israeli control. This playground is in Area A, which is supposed to be under full civil & security control by the Palestinian Authority. Why does Israel have any say at all about what can & cannot be built on Palestinian territory?

It should be mentioned that media is so damn sloppy that this park could be in Za’tara, a village near Bethlehem (57 km/35 miles away from Nablus) in Area C which Israel claims complete control over & where Israel is bulldozing homes under the pretext of construction without permit. Of course, it’s impossible to distinguish between Areas A, B, & C because the occupation is so ubiquitous & the Oslo Accords such a massive betrayal of Palestinian self-determination.