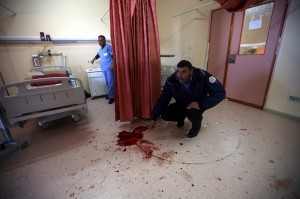 Obama said the attacks were an “outrageous attempt to terrorize innocent civilians” & the others surely concurred because if there’s one thing they all know something about, it is terrorizing innocent civilians–as does Hollande himself. Obama also said this was “an attack on all of humanity & the universal values we share.”

To expose the utter hypocrisy of the crocodile tears, most of them have been recently cited, some repeatedly cited by human rights groups for bombing hospitals in Yemen, Syria, Afghanistan, Gaza, & elsewhere. The 1949 Geneva Conventions define human rights protections for civilians in a war zone. According to clearly defined provisions in the Conventions, hospitals have special protected status. It is illegal under international law to attack a hospital or other medical unit, whether civilian or military.

Doctors Without Borders/(MSF) are still sifting through the carnage of hospitals bombed in Afghanistan, Yemen, & Syria. Assad is accused by MSF of using barrel bombs on hospitals in Syria. Israel not only bombed hospitals in Gaza but ambulances, schools, refugee centers, apartment buildings, & public markets.

This photo from last week is documentation of Israeli war crimes & flagrant violations of the 1949 Geneva Conventions. It’s from last Friday when Israeli commandoes entered a Palestinian hospital in Hebron, West Bank disguised as Palestinians, including one impersonating a pregnant woman in a wheelchair. They were looking for 20-year-old Azzam Shalaldeh, being treated in the hospital for gunshot wounds–who they accused of stabbing & “moderately wounding” an illegal Israeli settler. They handcuffed his sleeping brother Bilal (keeping vigil) to the next bed, yanked Azzam out of bed & arrested him, & shot dead his 27-year-old cousin Abdallah Shalaldeh as he came out of the bathroom. This is the scene when the commandoes left. If raiding a hospital, dragging a man out of a hospital bed, shooting down a man visiting his cousin isn’t “an attack on all of humanity”, then what the hell is!?

So where are the condolences? Is there a law of superior military might that renders those with bombers & AK-47s exempt from international humanitarian law? That gives Israel the right to eliminate due process, occupy & expropriate territory, bomb hospitals in Gaza & raid them in Hebron?

The need to rebuild the international antiwar movement remains imperative. The need to build BDS, the economic, cultural, & academic boycott of Israel is a central part of that historic mission.