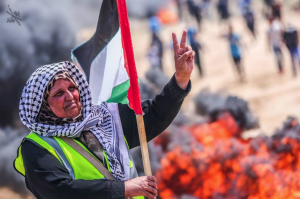 The Great Return March is a nonviolent campaign demanding the right of return for millions of Palestinians living in refugee camps. The only weapons Palestinians have are slingshots to return tear gas canisters & tires to burn so they cannot be seen by snipers. Against unarmed protesters, Israel is using an American manufactured rifle used for deer hunting in the US & an Israeli-made rifle with bullets which fragment, fracture bones, & cause very large exit wounds.

Israel has its own arms industry which is one of the big arms suppliers to India for the occupation of Kashmir & against its own dissidents. It also sells arms to Burma for the genocide against the Rohingya people. So the US commitment of $38 billion in military aid to Israel over the next ten years & the €370 million ($478 million USD) of military equipment licensed to Israel in 2016 by European countries is of a piece with the occupation of Kashmir & the genocide of the Rohingya people. The US & Europe would not bankroll Israel militarily & in other ways if it did not play a key role in US-European strategy to control the Middle East. Israel is in every way an extension of European & American colonialism which was the conflict motivating both WWI & WWII. This gives the lies to any claims that US militarism can play a progressive or humanitarian role in Syria–as if there weren’t overwhelming evidence bursting from the pages of colonial history.

A key demand of Palestinian solidarity is to stop arms sales to Israel, a demand which yokes Palestinian to Kashmiri & Rohingya solidarity.