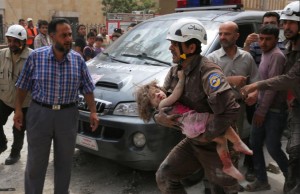 What are we to make of the report that in a state visit to Russia last week Netanyahu asked Putin to let Israeli aircraft fly freely in Syria & Lebanon?

Ze’ev Elkin, the Israeli Minister of Jerusalem Affairs, said Russia runs the forces in Syria, not the US: “Therefore, if we wanted free aviation for our aerial forces in Lebanon & Syria & if we wanted to maintain the security & political interests of Israeli citizens, the Russians are our target.”

Does that mean that despite denials by Russian & Assad officials, in fact it is Russian warplanes bombing civilians, hospitals, refugee camps in Syria with barrel bombs & white phosphorus?

What are we to make of US Pentagon claims that it doesn’t know if Russia & Syria are bombing Syria? All those infrared cameras & surveillance sensors & drones, all the Pentagon boasting that it has killed more than 120 ISIS leaders using that equipment & they don’t know who is bombing? Is there a sustained equipment failure? Or do we detect some kind of collusion? Some whopping problems with the several conflicting narratives about what he hell is going on in Syria?

The left & libertarians are divided now. Both want the chimera of “humanitarian intervention”–some on the side of Assad & Russia & others on the side of the US & its allies. Are they even certain those are two opposing sides? The entry of Israel into this killing field as an ally of Russia makes that a suspect proposition. Or is Israel, which receives billions in military aid from the US now operating as a free agent? Because if it operates as an opponent of the US in Syria, the US only has to pull the plug on that aid.

It’s an idiotic pipe dream to think bombers competing in the air are the solution to the violence of Assad or to the spread of ISIS. It’s a scenario that will massively increase barbarism against civilians & aggravate the possibilities for a region-wide war. What’s not to get about that?

Photo is a civil defense member carrying an injured girl after an airstrike in Idlib, Syria. If the prevailing narratives are believable, the bombers could only be piloted by evil fairies from outer space.

The only way to defend the Syrian people is to rebuild the international antiwar movement which does not just mean massive protests around the world but shutting down the machinery of militarism as was done by the anti-Vietnam War movement.