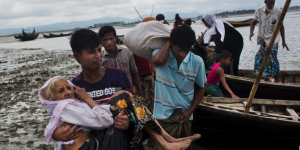 Israel, India, & China don’t make any bones about selling arms to Burma. They’re in no position to act squeamish or go all high & mighty over genocide when all three countries are engaged in the same unspeakable crimes. What rankles is that the European Union & US try to do the righteous strut for refusing to sell arms to Burma. Righteous my ass. They have billions & billions of dollars invested in Burma’s neoliberal economic program & if they want can bring that genocide to a halt by crippling the economy. But they don’t want because scorched earth policies are the very nature of neoliberalism, the barbaric phase of capitalism. Burma is getting away with genocide because other nations don’t have an issue with it whether they’re selling them arms or not. Which doesn’t mean for one moment that Israel, India, & China aren’t criminally contemptible for doing so.

In 2009, a UN guy called the Rohingya “probably the most friendless people in the world” & today the Washington Post said they are “quite simply one of the most helpless & forsaken peoples of the world.” Enough with the pity-mongering. Rohingya activists, like Kashmiri & Palestinian activists, are making brilliant use of social media & the internet to educate about their struggle. They are still isolated & in grave danger but they are now being heard & are no longer friendless or forsaken. If we work with them & commit to them, together we can build a movement with rallies, speak-outs, teach-ins to put powerful public pressure on the Burmese government. For the first time since they became subject to genocide, the Rohingya finally have thousands of supporters & allies. They no longer stand alone. This is not the final stage of genocide but the first stage of international solidarity.