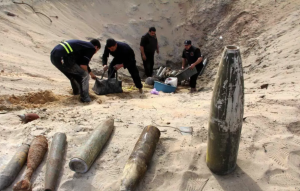 Just so we understand the scale of US lies & cynicism about Palestinians refusing to participate in a peace process with Israel:

In the summer of 2014, in its seven-week carpet bombing offensive over Gaza, Israel (bankrolled & backed by the US) dropped the equivalent of six nuclear bombs on the enclave of 360 square km/139 square miles. Bomb & explosive experts say Israel used Drones, Apaches, & several other kinds of warplanes to carry out 8,000 air strikes (Israel admitted to 5,226) dropping flechette shells (illegal anti-personnel weapons), fuel-air bombs (which explode twice, including after impact), DIME shells (which produce shrapnel), & flechette shells saturated with uranium. They also used tanks & troops. More than 60,000 artillery shells of different sizes were fired at Gaza.

In August 2017, the UNRWA reported that 29 tonnes (64,960 pounds) of explosive materials have been removed from Gaza since 2014, including 149 unexploded aerial bombs. Israel continues to fly bombing sorties over Gaza. That’s called occupation & ethnic cleansing.

The last so-called peace process brokered by the US led to the Oslo Accords which surrendered Palestinian self-determination to Israel. Excluding the corrupt Mahmoud Abbas & the compromised Palestinian Authority leadership, Palestinians are not foolish enough to trust a US-brokered peace process to bring them anything but dispossession & apartheid.

Support Palestinians by checking every label to make sure its country of origin is not Israel & by demanding the end of all US & foreign aid of any kind to Israel.