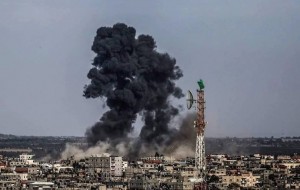 Israel has been conducting unprovoked airstrikes in Gaza since yesterday. We need to be ready to hit the streets with placards.

Media is aiding & abetting Israeli human rights crimes with an alibi claiming the Israeli military uncovered tunnels being built “by Gaza militants that Israel fears could be used to infiltrate its territory.” Even if there are tunnels that is no provocation for bombing civilians in Gaza.

We can’t let the aggression go on without a public response demanding Israel stop the bombing. It was only last year the UN said Israel had created such destruction in Gaza that it could be uninhabitable by 2020. It is hardly in a condition to sustain sporadic, short-term bombardments which Israel may use in place of carpet bombing to blunt the kind of public opposition it faced in 2014 when over a million people around the world protested.

Get your placards ready. The struggle of Palestinians against apartheid, colonialism, & genocide is our struggle.

(Photo of Israeli airstrike in Gaza from Mohmed Talal)