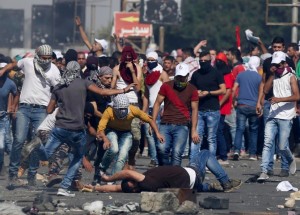 The Israeli rampage against Palestinians is certainly one of the most important political struggles going on right now because of Palestinian’s unrelenting defiance not just against Israeli apartheid & ethnic cleansing but because their struggle challenges US aggression & dominance in the Middle East. They are a beacon to suffering humanity around the world of defiance against brutal tyranny. And they strike terror into the oligarchs who run this world.

Everybody knows that. So it’s curious that this struggle, which dominates world attention & at all times keeps several photo journalists busy, is so poorly covered in photos right now. Are we looking at a blackout, at media attempts to hide the military violence of Israel toward unarmed Palestinians?

This is one of the very few photos of the past few days in mainstream media. The captions of course always cover for a multitude of human rights crimes. This young man was injured yesterday at a military checkpoint near the West Bank city of Nablus. The Associated Press caption read: “Tensions in the West Bank continued with near-daily violent demonstrations.” Foxy, eh? It’s the Palestinians who are violent. But then, in a blast of cognitive dissonance, the caption goes on to say “At least 45 Palestinians were wounded by live bullets in clashes between university students & Israeli forces.” Well now, anybody in their right mind should say outright that when Israeli soldiers are shooting live ammo at unarmed protesters, then the ‘near-daily violence’ is coming from Israeli soldiers, not the protesters.

Enough of this baloney! The truth will out through social media & independent journalism.

Build the boycott of Israel & hold emergency rallies demanding no aid of any kind to apartheid Israel. We are all Palestinians!