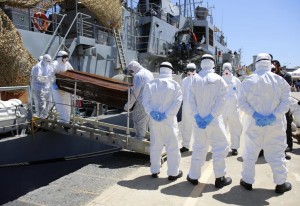 This is an Irish Navy ship LE Niamh in the Sicilian harbor of Messina unloading the bodies of 14 refugees ‘found dead’ on a boat off the coast of Libya with more than 450 others. The spokesperson for the Italian coast guard gave no details about how they died. Well since the EU is involved in a naval operation to stop them from crossing, this might be a case of the devil being in the details. Are refugees still drowning with all those naval ships out there? Are they shooting weapons at the boats? Are they adrift, unable to proceed to Italy because of a naval blockade? What the hell is going on since the lives of tens of thousands of people are at stake? People who have beloved who want to know where they are & if they’re safe.

There is something more than wretched about the Irish government sending its navy to deter refugees in the Mediterranean. Last March, Ireland’s prime minister Enda Kenny appealed to Obama not to deport an estimated 50,000 undocumented Irish in the US. Isn’t Ireland experiencing one of the largest exodus of citizens in decades because the EU is squeezing the life blood out of working people? But as a member of the EU, it’s participating in the naval operation against African refugees? Such are the sarcasms of EU & US immigration policy.

Wouldn’t the Irish Navy better serve Ireland in its own waters warding off European fishing trawlers coming in & dragnetting everything that moves in the sea & destroying the livelihoods of Irish fishermen? Wouldn’t Irish working people be much better off if the EU was given the old heave-ho & drowned in the bottom of the sea?