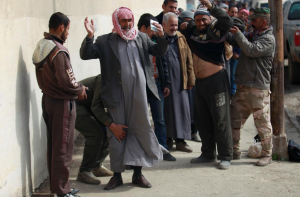 The “liberation” of east Mosul: last month, US & Iraqi coalition forces announced they had liberated the eastern part of Mosul & the surrounding villages from ISIS fighters.

It’s a peculiar war model with an estimated 5,000 ISIS fighters fighting urban guerrilla warfare against nearly 110,000 regular troops, paramilitary forces, & substantial US airpower. Even though the US coalition now claims control of east Mosul, ISIS continues to conduct drone strikes in the area launched from its base in the western part of the city. Who is supplying those drones & the explosives attached to them & how are they delivering them to ISIS fighters in west Mosul past the cordon of US, Peshmerga, & Iraqi forces surrounding the city?

This photo is Iraqi soldiers in “liberated” east Mosul searching civilian men & checking their ID cards “in a search for ISIS fighters.” Do they think ISIS is hiding out in their underwear? But they aren’t searching for ISIS or its collaborators. This is not a liberation. It is an occupation, just like the Syrian & Russian military occupation of east Aleppo. Civilians complained to Amnesty & HRW that they couldn’t tell the difference between repression under ISIS & under US-Iraq coalition forces. Isn’t that a mouthful of condemnation.

US out of Iraq & Syria! The immediate, unconditional withdrawal of all foreign military operatives is the only principled antiwar demand.