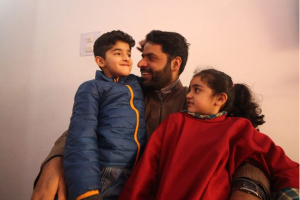 This delightful photo is Khurram Parvez reunited with his family after release from illegal imprisonment. It appeared in The Caravan, an Indian journal covering politics & culture, along with an interview with him published today.

It’s an important interview which makes quite clear why India jailed him: not for any criminal activity but for his effective political & human rights work not just in Kashmir but internationally.

Once again, the international defense campaign was central to his release & is a result of the work he did particularly around forced disappearance. The dawn of international solidarity with Kashmir has come–thanks to the unrelenting work of Kashmiri activists.