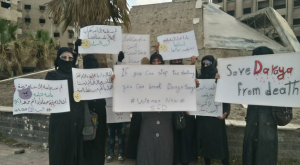 International Women’s Day 2017 requires a tribute to the women of the Syrian revolution. It’s no coincidence that just as Palestinians & Kashmiris are depicted as terrorists, so also are Syrian revolutionists depicted as jihadi thrill-killers–or as fallen away evangelicals & burned out Presbyterians in the US (who don’t know the difference between Lutheran & Methodist) call them, Wahhabis & Salafi, which in truth they don’t know from hummus. There is nothing more detestable in politics than those like Blumenthal, Norton, Khalek & all their guppies who blow smoke to cover for their hatred of Muslims.

Lessons from Syria on women’s empowerment during conflict,
https://www.opendemocracy.net/5050/maria-al-abdeh/supporting-women-s-empowerment-during-armed-conflict-lessons-from-syria#comments

Our deepest respect & heartfelt regrets that international solidarity has been weakened by so many who impose US Pentagon war mongering against Muslims on Syrian revolutionists.